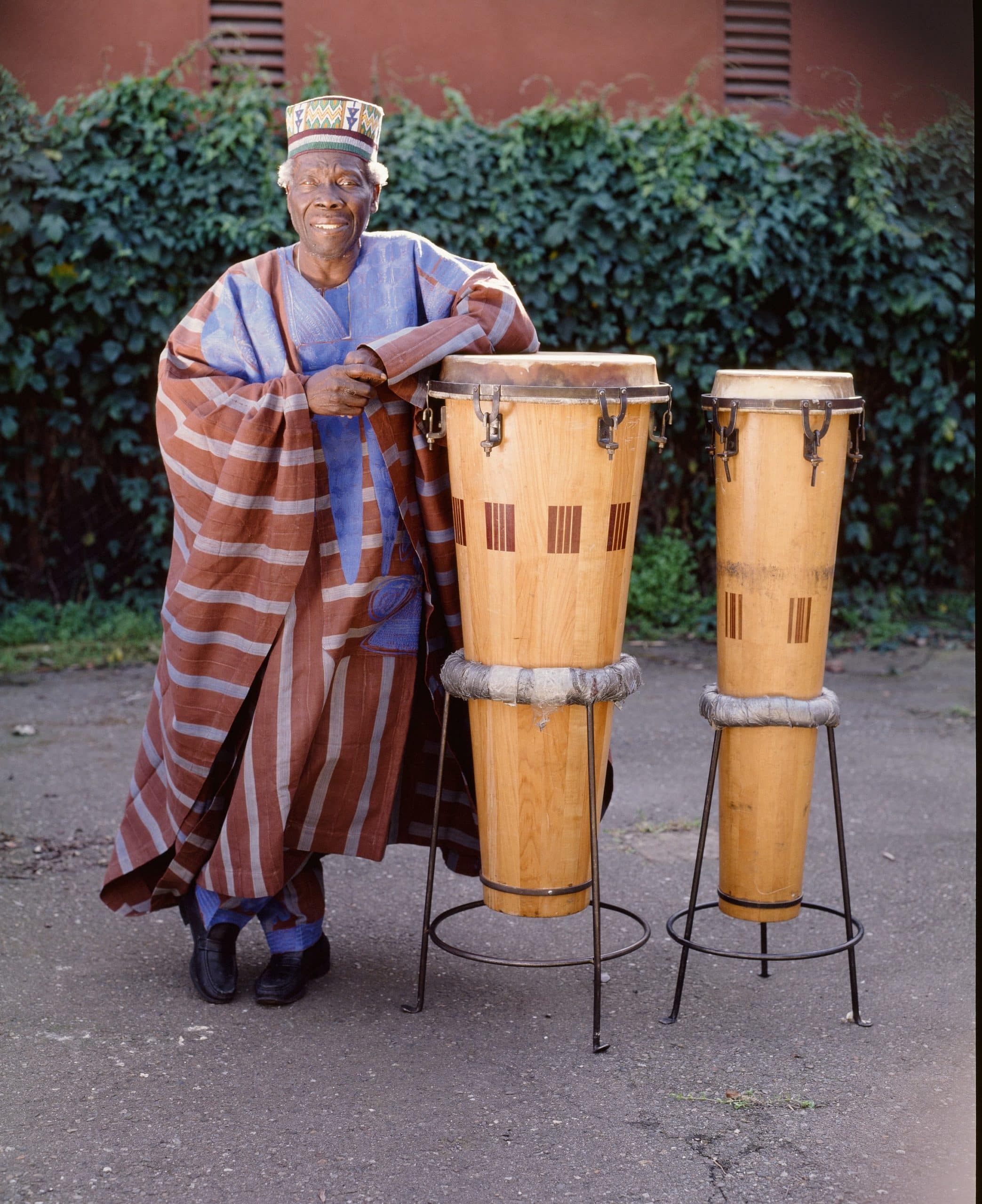 THE GODFATHER OF CONTEMPORARY COMMUNAL CIRCLES, BABATUNDE OLATUNJI WAS BORN IN 1927 IN AJIDO, NIGERIA, FORTY MILES FROM THE CAPITAL LAGOS, A FISHING VILLAGE ON THE SOUTH-FACING COAST OF NORTH AFRICA. HE SHARED A COMMON DREAM OF UNIFYING HUMANITY THROUGH THE INTERNATIONAL LANGUAGE OF MUSIC. BABA FIRST SIGNED A RECORDING CONTRACT WITH COLUMBIA RECORDS IN 1959. THOUGH HE WOULD RECORD A TOTAL OF 6 RECORDS WITH COLUMBIA, HIS FIRST RECORD, “DRUMS OF PASSION” WAS ONE OF THE MOST POPULAR AS IT SOLD OVER 5 MILLION COPIES IN 1959 AND HAS SINCE GONE ON TO SELL OVER 50 MILLION COPIES. HIS MOST RECENT SOLO RELEASE, “LOVE DRUM TALK” GARNERED HIM A 1998 GRAMMY NOMINATION FOR BEST WORLD MUSIC ALBUM. IN 2002, SONY MUSIC REISSUED BABATUNDE’S ORIGINAL COLUMBIA RECORDS CATALOG ON COMPACT DISC. IN 2000 BABA RECORDED HIS FINAL STUDIO PROJECT SPIRIT OF MUSICAL AFRICA ON MANSMARK RECORDS BEFORE HIS UNTIMELY PASSING IN 2003.

Artists that Baba Influenced John Coltrane: In 1961, Babatunde shared a bill with John Coltrane. In June 1962, John Coltrane composed and recorded as homage to his friend and inspiration, “Tunji.”

Bob Dylan: Bob Dylan sang about Baba on his “The Freewheeling Bob Dylan” album. (”What I want to know Mr. Football Man, is what do you do about Martin Luther King? Willie Mays? OLATUNJI?)

Micky Hart: In the mid-1980’s Baba collaborated with drummer Micky Hart of the Grateful Dead with whom he produced two critically acclaimed albums for Rykodisc, “Drums of Passion: The Invocation” (1998) and “Drums of Passion: The Beat” featuring contributions by Hart and Carlos Santana. Baba’s popularity surged in 1990’s , following his involvement the Grammy award-winning Planet Drum project, the multi-cultural world-beat percussion ensemble he co-founded with Micky Hart.

Carlos Santana: Carlos Santana re-recorded Baba’s version of “Jin-Go-Lo-Ba” in 1969 as “Jingo”, making it one of his band’s signature hits.

Tu-Pac Shakur: Babatunde participated in the posthumous collaboration with Tupac Shakur entitled “Wake Me Up When I’m Free” included on the slain rapper’s 2001 spoken world album, “The Rose That Grew from Concrete”. Babatunde Olatunji appears on the album courtesy of MansMark Records.

Baba in Film and Theatre
Baba Olatunji has written many musical compositions, including scores for the Broadway and Hollywood production of “Raisin in the Sun”. He also contributed to Spike Lee’s movie, “She’s Gotta Have It.” Beyond film and theatre, Baba also appeared on television when he made appearances on the Ed Sullivan Show and Johnny Carson’s Tonight Show.

Master Educator’s Music Workshops: Baba taught extensively in community schools and holistic retreats and institutes such as at Omega (upstate, NY) and Esalen (Big Sur, California) and lending is presence to a variety of events for world peace.

1927 – Born in the small village of Ajido, Nigeria, about forty miles
from Lagos, the capital of the country. As a child, Olatunji accompanied

his great aunt Toyin to hear the drums – hollowed out from trees and covered
with the skin of goats – punctuate the lives of his people.

1950 – Olatunji and his cousin were each awarded a scholarship and were
on their way to America to attend school in Atlanta, Georgia

1954 – After graduating from Atlanta’s Morehouse College with a degree in Diplomacy, Olatunji moved to New York City to begin a Political Science postgraduate program in Public Administration at New York University. To cover
his expenses started a small drumming and dance group Insights

1963 – Join Martin Luther King for his March on Washington

for African Culture (OCAC) in Harlem, offering classes in African dance, music, language, folklore, and history. The NEA help to fund Olatuni’s OCAC teacher and student training programs which went to all over the schools in the
New York tri-state area, all the way to Long Island. He drummed

the All One Tribe Drumming Education Award for his
commitment to children, interracial harmony and education.

1996 – Cultural ambassador Baba Olatunji manifested another of his goals by inviting thousands of drummers to congregate at the Washington Monument, prior to Clinton’s Presidential Election to participate in Drum Dance and Prayer
for Peace.

1997 – Love Drum Talk, is last CD released was nominated for a Grammy
Award.